In October 2018, Klaus F. Zimmermann, UNU-MERIT at Maastricht University, and  President of the Global Labor Organization (GLO) has taken office at Renmin University of China to discuss joint research interests with colleagues in Beijing. He also promotes research on China, which has been published by the Journal of Population Economics (see below), the academic journal he is heading as the Editor-in-Chief.

The Journal had recently published many studies on China. For instance, it has been found that due to substantial additional government subsidies, the quality of migrant schools has increased:

Quality of migrant schools in China: evidence from a longitudinal study in Shanghai by Yuanyuan Chen, Shuaizhang Feng; Vol. 30:3, 1007-1034

Abstract: “As spaces in public schools are limited, a substantial number of migrant children living in Chinese cities but without local hukou are enrolled in private migrant schools. This paper studies the quality of migrant schools using data collected in Shanghai in 2010 and 2012. Although students in migrant schools perform considerably worse than their counterparts in public schools, the test score difference in mathematics has almost been halved between 2010 and 2012, due to increased financial subsidy from the government. We rule out alternative explanations for the convergence in test scores. We also conduct a falsification test and find no relative changes in the performance of migrant school students based on a follow-up survey of a new cohort of students in 2015 and 2016, a period with no changes in financial subsidies to migrant schools.” 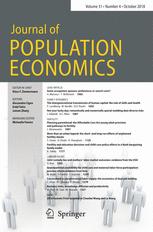 PAPERS ON CHINA PUBLISHED IN THE JOURNAL OF POPULATION ECONOMICS: 2017-2019

►Quality of migrant schools in China: evidence from a longitudinal study in Shanghai by Yuanyuan Chen, Shuaizhang Feng; Vol. 30:3, 1007-1034

This entry was posted in Research. Bookmark the permalink.