Erdal Tekin is a Professor of Public Policy in the School of Public Affairs at American University. He is also a Research Associate at the National Bureau of Economic Research (NBER) and a Fellow of the Global Labor Organization (GLO). His research focuses on health economics and the economics of crime.  More information about Erdal Tekin’s research and his other professional activities can be found on www.erdaltekin.com. The Journal of Population of Economics is the top journal in the field of population economics. It is an international research journal that publishes original theoretical and applied contributions on the economics of population, household, and human resources. It is owned by Springer Nature and operates from POP at UNU-MERIT, Maastricht, The Netherlands. It is published in collaboration with the Global Labor Organization (GLO) and the European Society for Population Economics (ESPE).

The Journal of Population Economics is one of the top ranked Springer Nature journals in economics. In 2017 it has published 40 research papers out of 524 submissions, which implies a 92.4% final rejection rate. Submissions have significantly increased, eg. doubled in the last decade from below 300 to nearly 600 this year. The impact factor has increased from 0.5 in 2007 to an expected 1.3 in 2017. For more details of the actual performance of the journal  see this post and the just published Report of the Editor-in-Chief 2018.

The Journal of Policy Analysis and Management (JPAM) is the top field journal in public policy and published on behalf of the Association for Public Policy and Management (APPAM). It has been ranked number 21 for 2016 among economics journals by the impact factor (IF: 3.415) with Journal of Economic Growth rank 20 (IF: 3.440) and Econometrica rank 22 (IF: 3.379).

Erdal Tekin has served as an Editor for the Journal of Population Economics between 2000 and 2018 together with the acting editors Alessandro Cigno and Junsen Zhang and Editor-in-Chief Klaus F. Zimmermann. For nearly two decades, Erdal Tekin took responsibility for papers dealing with risky behavior, family and labor. Together with the full team, he considerably shaped the profile and extraordinary success of the Journal of Population Economics. He also supported the development of the European Society of Population Economics (ESPE) by contributing to their annual meetings and making the connections to the local team organizing the very successful 2015 annual ESPE congress at Izmir University of Economics, Izmir, Turkey.

As Editor-in-Chief Klaus F. Zimmermann, who is also the GLO President, stated:

“Erdal has been of invaluable help in developing new areas like risky behavior for the journal, ensuring the highest quality standards and always providing the requested team spirit. The remaining editorial team is grateful for his long-term contributions and will miss his advice, ambitions and inspirations. We wish him all the best in his new role as Editor-in-Chief  of this major journal, JPAM.”

The appointment of Oded Galor of Brown University as Editor of the Journal of Population Economics will be detailed in a separate post!

Questions are by Klaus F. Zimmermann.

Erdal Tekin: The U.S. society and many societies across the globe are facing an increasingly complex set of pressing problems, ranging from climate change and health care to immigration and gun violence.  Unfortunately, we sometimes see that the so-called solutions to these problems are debated or evaluated through the lenses of ideology and faith. These non-scientific approaches both prolong these problems and make any remedial efforts later less likely to succeed and much costlier for the public. This is unfortunate because, thanks to the analytic tools developed by social scientists and the availability of large scale and rich data sources, we are in a position to identify effective and efficient solutions to many of these problems today. What we need is less ideology and more data-driven, evidence based approaches that are formulated based upon on policy research.

Erdal Tekin: Editing a journal is a big job – it is extremely time consuming and comes with tremendous responsibility. But at the same time, it is a very gratifying experience to be at a position where you can have an influence the way in which your discipline evolves.  In my own experience serving as an editor for the Journal of Population Economics for more than eight years, I have learned tremendously from reading hundreds of papers and thousands of referee reports, which has improved my sense of what constitutes good scientific work.  As a result, I believe, or I hope, that I have become a better researcher myself. Editing a journal also forces one to become more disciplined, organized, and patient.

Erdal Tekin: The Journal of Policy Analysis and Management (JPAM) already enjoys a well-deserved reputation of publishing innovative and empirically rigorous research that meets the highest standards of scholarship across disciplines and policy domains.  JPAM is not only the most visible journal in the academic community concerned with issues related to public policy and management, but it is also one of the most prominent journals across all social sciences with respect to its reputation and impact factor. I view it as my utmost critical responsibility to ensure that the journal continues to advance in its current trajectory and solidify its reputation as the “go to” outlet for the very best scientific contributions in public policy and management. Accordingly, a key goal of my editorship would be to continue practices that ensure that priorities of high quality and inclusivity of various disciplines and policy domains are met. The vision of JPAM that I embrace is one that emphasizes high standards, wide visibility and impact, inclusivity, and diversity. 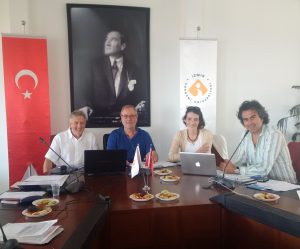 This entry was posted in Interview, News, Policy, Research. Bookmark the permalink.